May is Military Appreciation Month. Designated by Congress in 1999, it’s a time to recognize current and former members of our country’s military. To all those who have served, thank you for your service. 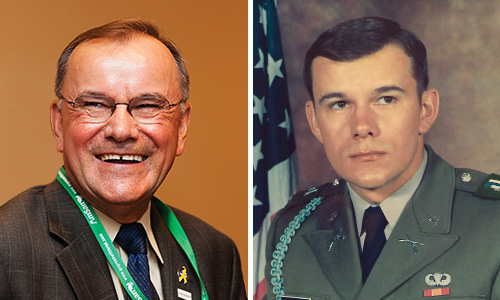 “Freedom is not free, and our soldiers today, who are standing on the shoulders of our military veterans from every service over the history of our nation, are even more amazing with their dedication and commitment to being Freedom’s Guardians,” said Chuck Guta, a Senior Business Development Representative on the Department of Defense (DoD) Army/Air Force Team, who has been with SourceAmerica over seven years.

Originally from Ohio, Chuck recognized early on that he wanted to serve his country. He was motivated to join the military having seen both of his brothers go through Reserve Officer Training Corps (ROTC), so he joined the Army. Chuck entered the Army in 1973 through ROTC at John Carroll University as a Second Lieutenant Airborne Infantry Officer.

His basic branch was the Transportation Corps and he ultimately became one of the first members of the Army’s Acquisition Corps (AAC). Being a member of the AAC gave him the opportunity to work with what is now the AbilityOne Program. As an Army Senior Chief of Contracting, he became very familiar with the benefits and mission of the AbilityOne Program.

Chuck served the majority of his time in the Army with assignments in Northern Virginia, Germany and Atlanta and retired as a Colonel. His wife is also an Army veteran and his daughter is an Army captain assigned to Fort Bliss in Texas.

He is most proud of his Airborne Wings and was honored to receive the Distinguished Service Medal upon his retirement. Chuck also recognizes that his time in the Army is just as much about recognizing the amazing people that he served with (their sacrifices and commitment to being freedom’s guardian) that has made his service medal even more special.

Chuck believes that SourceAmerica is a good place for veterans because our mission of finding employment opportunities for people with significant disabilities parallels directly with taking care of our wounded warriors and veterans with disabilities. 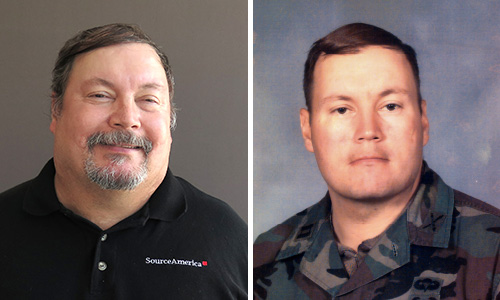 Todd Newell is a Subject Matter Expert for Procurement List Management on the AbilityOne Programs team. Growing up in a small town in Iowa, he enlisted in the Army right out of high school to travel the world, pay for his college education and for the prospect of being stationed in Germany, where he hoped to reconnect with his German relatives (he spent close to half of his military career there). Todd retired as a Captain and an Assistant Brigade Operations Officer after holding a series of leadership roles in military intelligence and the field artillery.

“I wouldn’t change one day of my life serving in the Army,” Todd said. “I’ve met so many interesting people. It still awes me. Those friendships will last forever.”

Todd’s awards include his Bronze Star from Desert Storm and the Navy Achievement Medal (which is a unique award for an Army officer). His other decorations include the Airborne Parachute Badge, the Air Assault Badge and the Belgian Parachute Badge.

Having been with SourceAmerica for eight years, he feels that SourceAmerica is a solid employer for veterans, especially because of the organization’s mission and the opportunity to maintain a connection to the DoD.

“A lot of soldiers coming out of the military are wounded warriors,” said Todd. “You’re hanging up your uniform but you’re helping the contracting officers and helping make sure that DoD’s money is wisely spent since it’s taxpayer dollars. Because of our work, it’s another way many of us can still stay connected to the DoD, and in some cases, our former branches,” Todd said.

Todd also appreciates the strong camaraderie among SourceAmerica’s veterans, regardless of the branch they served. “When we all get together, we can raz one another about one another’s branches and still be buddies because we’re part of a unique organization. It’s also nice to be able to work with other team members who’ve been in the military. There’s also the unity of the mission; whether the veterans themselves have a disability, or they might know someone with a disability, such as a friend or family member,” Todd said.

Tamara Rodriguez-Hale joined the Army in 1992, recognizing early on that the Army was a worthwhile organization. You could also say the military was already in her blood; both her father and brother had served as well. Her father was a Military Police Officer in Paris during the Vietnam War and her brother graduated from the U.S. Air Force Academy.

Tamara received training as an Automated Logistics Specialist at Fort Lee in Virginia, and was later assigned to Fort Bragg, North Carolina, where she served the majority of her time. There she learned the ins and outs of logistics and warehouse management. Tamara became an expert in automation technologies, incorporating scanning and bar codes while overseeing supplies, such as gas masks and toilet paper, and everything in between. During this time, she was also awarded a Sharpshooter medal; an award that she attributes to her father for showing her how to shoot and hunt growing up.

Following her Army career, Tamara became a full-time military spouse. During her husband’s three-year deployment to Bosnia, she navigated living off base with a young child with not much more in their small German village than a pig farm, a bar and a modest hotel. After her husband retired from the service after being wounded and navigating that difficult process, she went on to build a career with strong ties to the military. Along the way she has worked with Army personnel transitioning from the military and advocated for the most severely injured, ill and wounded returning from Iraq and Afghanistan. Tamara has now been with SourceAmerica for 11 years.

“I believe SourceAmerica is a great place to work, especially for its inclusivity and acceptance of differences,” Tamara said.

Learn more about how SourceAmerica serves the veterans who served our country.

Enjoy this? You might like these stories, too:
Challenges Can Lead to Opportunities – Climbing Mt. Kilimanjaro
Why I Care So Much about Veteran Hiring
How to Build an Inclusive Business Culture