The nation will celebrate the 30th anniversary of Americans with Disabilities (ADA) on July 26. The ADA is a civil rights law that prohibits discrimination against people with disabilities in all areas of public life, including jobs, schools, transportation, and all public and private places that are open to the general public.

As we commemorate the ADA's 30th anniversary, I want to share my thoughts on what the legislation means to me. In the late 1980’s, I was a fifth-grade student at Kendall Demonstration Elementary School, located on the Gallaudet University campus in Washington D.C. As a part of a school assignment, we were asked to write about why the ADA is important for Deaf children. My teacher and parents were impressed with my essay and encouraged me to write a letter to my Congressman, Steny Hoyer. He was inspired by what I wrote and quoted me in his speech on the House of Representatives floor when he voted for the ADA. You can read what Rep. Hoyer said on page 10856 of the Congressional Record.

That experience was a starting point in my personal journey to becoming an advocate, which eventually led to a career advocating for employment opportunities for people with disabilities. I am proud to work for a wonderful organization like SourceAmerica® whose mission is to make the American Dream more accessible. Currently, I am the Policy Manager in the Government Affairs team.

Please join me this month in celebrating the ADA's 30th anniversary. In doing so, I encourage you to take a minute to reminisce about what our community was like without the ADA and what the legislation does for people with disabilities in the AbilityOne® Program. However, our work is not done. The first thing that came to my mind when I was asked, “What does ADA do for you?” was that the ADA is a steppingstone in the disability community because it ensures that people with disabilities are treated equally and with dignity.

You may ask why I chose the word steppingstone. Let me tell you: While there have been some advancements and improvements in ensuring that people with disabilities have access to the workplace, public spaces (such as federally owned buildings, communications, health care, and transportation), there is still more work to be done to ensure that people with disabilities are not being discriminated against because of their disability.

As far as my personal experiences with the ADA are concerned, the first time I really understood what the ADA means for individuals like me who are Deaf was in the summer of 1996 - six years after the legislation. I 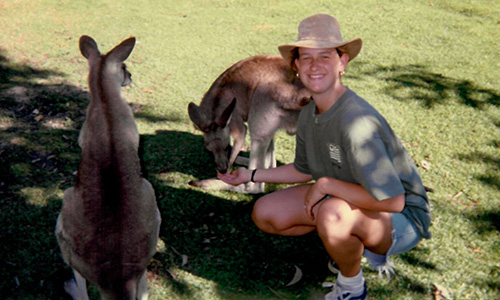 was 17 years old and living abroad in Australia as a high school exchange student. My American hearing counterparts had no issues getting around in Australia. However, I struggled adjusting because I had limited access to communications. There were a few situations where I faced a clear lack of accessibility in communications during that summer. However, there was a specific incident where I first realized how important the ADA was for me.

About midway through the exchange program, I wanted to rent a videotape from Blockbuster and my host mother warned me that the videotapes were not closed captioned. I was mystified because I was convinced that since Blockbuster was an American-owned business; people with disabilities in Australia should have the same access to watching a movie at home. It was a poignant moment for me because I realized that even though both of our countries spoke the same language, my Aussie friends did not have the same access since Australia did not have a law similar to the ADA.

Why did I choose to share this moment with you? The reason I shared this story is because most people take for granted the ability to communicate on their own. Even though with recent advancements in technology and improved access to sign language interpreters, I am still not quite on the same par as my hearing counterparts. For instance, a stranger walking by me on a public street would not know that I am Deaf unless they start speaking to me. Nearly 90% of the time, the stranger would respond, "Oh, I am sorry, can you read my lips?". That pretty much sums up our conversation. Fortunately, there has been some advancement in technology, especially with the use of smartphones, that allow us to communicate via "text to speak" applications.

These are just some of the personal examples that I am compelled to share with you, especially during the COVID-19 pandemic. We are immediately reminded during times like these that there are still challenges for Deaf people. With ADA protections, Deaf individuals are required to have access to communications including sign language interpreting services, closed captions for live broadcasts, and video relay services for telecommunications. However due to the pandemic, Deaf individuals are facing new challenges with the use of masks while practicing social distancing. This is an example of why the ADA is a critical steppingstone in the disability community, but we are not quite there yet and that there is still more work that needs to be done.

Enjoy this? You might like these stories, too:
Challenges Can Lead to Opportunities – Climbing Mt. Kilimanjaro
Why I Care So Much about Veteran Hiring
How to Build an Inclusive Business Culture