Paving a path for the future

Raymond Broadus has a passion for collecting CDs and DVDs, drawing, and making a difference in the world around him. Every day, Raymond shows up to work, rolls up his sleeves, and packages shirts that will be mailed out the U.S. Military for service members.

The AbilityOne® Program, one of the largest sources of employment for people who are blind or have significant disabilities, has opened a world of opportunities for Raymond. He first joined Knox County Association for Remarkable Citizens, one of the nonprofit agencies in the SourceAmerica network, over 20 years ago. Since then, Raymond has had the support he needs to succeed at his job. 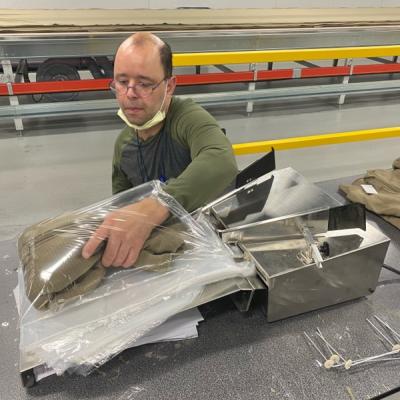 A day in the life for Raymond starts with getting to work at 8 a.m., saying hello to co-workers, and talking through the task at hand. In a single hour, Raymond packages nearly 500 shirts using a special machine created by SourceAmerica Productivity Engineers to help him increase his efficiency. The innovative tool blows air into the bag, cutting down the time it takes him to open each bag to place the shirt inside.

“It was really awesome when SourceAmerica came in to create the machine,” said Raymond. “I never thought anyone would make something like that for me. It made me happy - big time.”

Every day, Raymond looks forward to supporting the members of military. He had no idea that a job like this one, where he could make an impact, even existed. The AbilityOne Program gave Raymond a chance to be independent, learn new things, and meet a variety of people in an inclusive environment.

“Raymond is very dedicated and sometimes even hard-headed, which makes him successful,” said Keith Peacock, Managing Director of Manufacturing at KCARC. “He is committed to doing things right and is always smiling and happy.”

Outside of work, Raymond is a collector. He has over 100 CDs and DVDs and a variety of colored gel pens. In fact, if anyone ever needs a pen around the office, they know it’s likely that Raymond will have an assortment to choose from. His favorite colors to carry around are pink and blue. 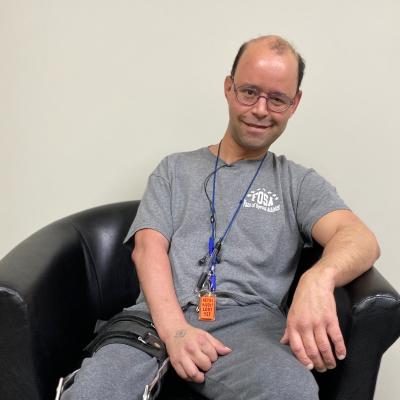 Raymond is also a talented artist, and he is intrigued by the world around him. He will often focus on one specific thing and draw it. He can even write backwards – an impressive skill that he is not afraid to show off.

On the production floor, Raymond is always interested in what everyone else is doing. He is pleasant to talk to. He even enjoys back and forth jokes with KCARC CEO Mike Carney. “Raymond has a very cool personality and way about who he is,” said Keith. “He always asks people about their day and is genuinely interested in building connections.”

In the future, Raymond hopes to continue trying new things and increasing his own productivity. He appreciates that he has been equipped with the right tools and support to excel every step of the way.

Enjoy this? You might like these stories, too:
Celebrating National Career Development Month
AbilityOne Congressional Champions Program Celebrates 20 Years!
Elevating Workplace Equity Through Diversity and Inclusion